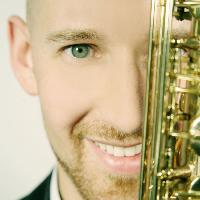 Jones has conducted clinics and master classes at both the secondary and collegiate levels, including a recent saxophone clinic at the Maryland Music Educators Association State Conference. With nearly twenty years of teaching experience, Jones has recently published articles in The Instrumentalist magazine and on BandDirector.com.

Jones is actively involved with commissioning and premiering new works for saxophone. He has presented a number of world premieres with orchestras and small ensembles as a soloist. He recently returned from the North American Saxophone Alliance Biennial Conference where he presented the U.S. premier of David Stock’s Go For Two and Steven Simpson’s Pandora’s Box. He also presented similar world premieres at the 2015 World Saxophone Conference in France. He performed at the 2015 Rousseau Celebration, honoring Eugene Rousseau as a moving force in saxophone performance for over fifty years.

He recently released La Souplesse, a CD of music for saxophone and piano, and was presented as a featured soloist with the Erie Philharmonic.

Jones has appeared with internationally celebrated artists and award-winning ensembles throughout his career. As a featured soloist he has performed with the Grammy award-winning ensemble Imani Winds, Zagreb Saxophone Quartet, Erie Philharmonic, Erie Chamber Orchestra and Edinboro Chamber Ensemble. Additionally, he has been broadcast on the nationally syndicated NPR Program Saint Paul Sunday and Performance Today playing with the Saint Paul Chamber Orchestra under the baton of Andreas Delfs.

Other appearances include the World Saxophone Congress XII in Montreal, XIII in Minnesota and XIV in Slovenia; commissioning projects with Libby Larson and with Faye-ellen Silverman. Other performances include a presentation of the composition Deep Blue Spiral for the composer David Heuser at the SEAMUS convention for alto saxophone and tape. In addition, he premiered Borne by Constellations of Green Birds by David Heuser (Crane School of Music) at a North American Saxophone Alliance Saxophone Conference in 2007.