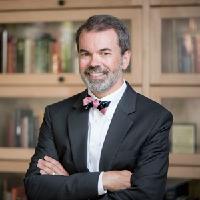 Professor David Pimentel, originally from the San Francisco Bay area, studied at BYU, Berkeley, and Harvard, and has graduate degrees in both law and economics from Berkeley. Before beginning his academic career, he oversaw Court Management, Legal Aid and Detention at the United Nations at the International Criminal Tribunal for the former Yugoslavia, and directed Rule of Law activity in South Sudan for the U.N. Mission there. He has also lived in Romania and in Bosnia and Herzegovina, leading USAID-funded court reform projects in each country.

In 2010-11, he returned to Bosnia on a Fulbright, as Visiting Professor at the University of Sarajevo, to research the impact of post-conflict judicial reform in that country. After his Fulbright year, he moved to Ohio Northern University where he was the founding director of the Center for Democratic Governance and Rule of Law, and where he also directed their Rule of Law-focused LL.M. Program. He has taught and lectured, mostly on rule of law and post-conflict justice, at Université d’Auvergne (France), University of Hong Kong, Trier University (Germany), Tribhuvan University (Nepal), Amity University (India), Melikşah University and the University of Istanbul (Turkey), and a variety of universities scattered across the United States.

He worked for 12 years in the federal judiciary, including one year as a Supreme Court Fellow in Washington, DC, one year as a law clerk for the Honorable Martin Pence, in the U.S. District Court in Honolulu, and six years as Assistant Circuit Executive in Ninth Circuit Headquarters in San Francisco. Before that, he spent two years in private practice with the law firm Perkins Coie in Seattle.

He has been admitted to practice in Washington, California, Hawaii, and the District of Columbia. He has studied many languages over the course of his career, and speaks almost all of them very badly.

He and his wife Annette Bay (who writes juvenile nonfiction) have six beautiful and brilliant children, as well as the distinction of having dragged them through some of the more interesting and inhospitable places on earth. He has a passion for longboard surfing, running, Pac-12 sports, old movies, and cool jazz.