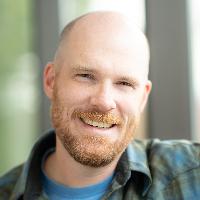 Map of Science
Michael McGriff is an author, editor, and translator. He was born and raised in Coos Bay, Oregon, and attended the University of Oregon, The Michener Center for Writers at the University of Texas at Austin, and Stanford University. He is the co-author, with J. M. Tyree, of the linked story collection Our Secret Life in the Movies, which was selected as one of NPR’s Best Books of 2014. His poetry collections include Early Hour, Black Postcards, Home Burial, a New York Times Book Review Editors’ Choice selection, and Dismantling the Hills. He is the translator of Nobel laureate Tomas Traströmer’s The Sorrow Gondola and is the editor of a volume of David Wevill’s essential writing, To Build My Shadow a Fire. From 2009-2014 he published and edited Tavern Books, a nonprofit literary press dedicated to poetry in translation and the revival of out-of-print world classics. He is a former Stegner Fellow and Jones Lecturer at Stanford University, and his work has been honored with a Lannan Literary Fellowship, a Ruth Lilly Fellowship, and a grant from the National Endowment for the Arts. His writing has appeared in The New York Times, Poetry, Bookforum, The Believer, Tin House, American Poetry Review, and on NPR’s Weekend Edition Sunday and PBS NewsHour. He has taught creative writing at Stanford University, The Michener Center for Writers, and Lewis & Clark College, and for several years has mentored young writers as a Visiting Writer at American International School in Vienna, Austria, and as a faculty member in the Kenyon Review Young Writers Workshop.