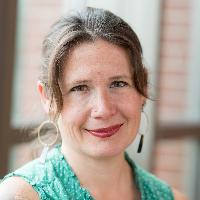 Co-investigator Network
Alexandra Teague’s first book of poetry, Mortal Geography, won Persea Books’ 2009 Lexi Rudnitsky Prize and the 2010 California Book Award. Her second book, The Wise and Foolish Builders, will be published by Persea in April 2015. Her work has also appeared in Best American Poetry 2009, Best New Poets 2008, and many journals. She was a 2006-08 Stegner Fellow and the recipient of a 2011 National Endowment for the Arts Fellowship, a 2012 UI Seed Grant, and a 2014 UI Kurt Olsson Early Career Research Fellowship. She has taught at University of Miami, City College of San Francisco, and Stanford, and spent Fall 2010 as Visiting Professor of Poetry in the BA/MFA programs at University of Arkansas (near her old hometown of Eureka Springs). She is currently faculty advisor for Fugue, an editor for Broadsided Press, and an active member of the interdisciplinary arts BASK Collective, of which she is a founding member. She is working on her third manuscript.