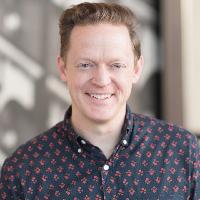 Growing up in Logan, Utah, Skinner was exposed to a diverse range of musical styles from the radio stations his family owned and operated. Drawing inspiration from classical, contemporary, R&B, funk, hip-hop, rock, county and more, Skinner is a consumer of all types of music, trying to expose himself to as music as possible.

As a classical double bassist, Skinner performs regularly with both the Utah Symphony and Utah Festival Opera Company. He has performed with many other ensembles including the Greeley Philharmonic, Fort Collins Symphony, Walla Walla Symphony, Washington Idaho Symphony, chamber ensembles and orchestras through the western states. Skinner has been involved with numerous recording projects with symphonies ranging from studio work to live recordings of new and commissioned works.

Skinner has taught courses in the jazz studies, music business and musicology areas, while maintaining a diverse studio of classical, jazz and electric bassists.