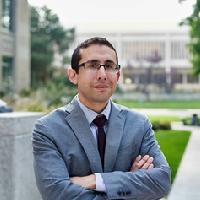 Map of Science
Benjamin Plener Cover studied engineering, mathematics, and economics at the University of Toronto; international development at the London School of Economics; and law at Yale. During law school, he was a submissions editor for the Yale Journal of Law and Feminism, a student director of the San Francisco Affirmative Litigation Project, and a participant in the Prisoner Legal Services Clinic. He also founded a nonprofit organization called 24 Hours for Darfur. Upon graduation, he joined the public defender’s office in New Orleans, where he handled misdemeanor and felony cases in municipal and state court, developed a client services division, and worked on special litigation. He then served as the legislative director for New Orleans City Councilmember LaToya Cantrell, focusing on policy issues including neighborhood revitalization, land use, economic development, immigration, health, education, criminal justice reform, and political reform.